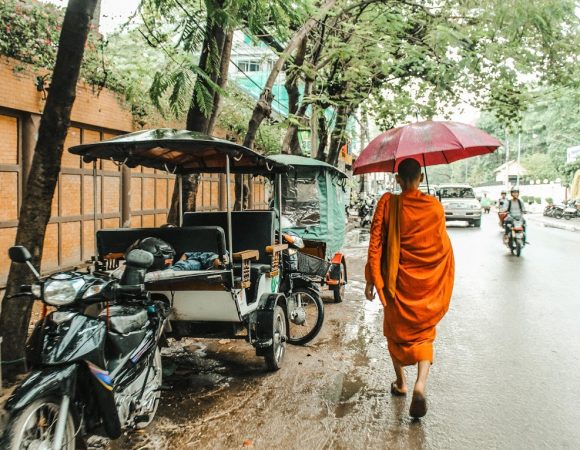 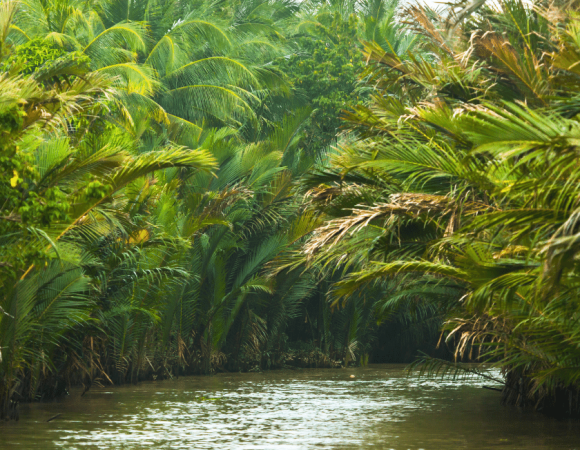 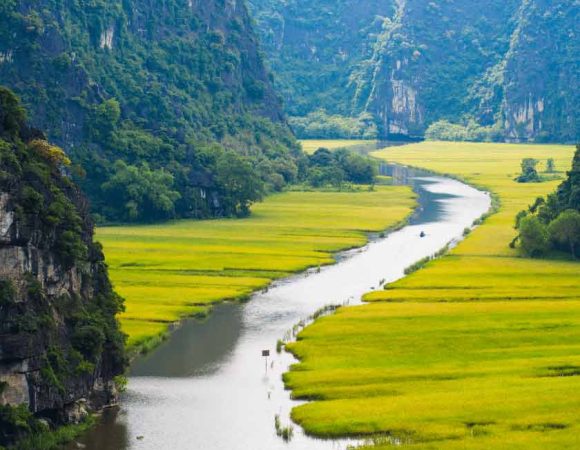 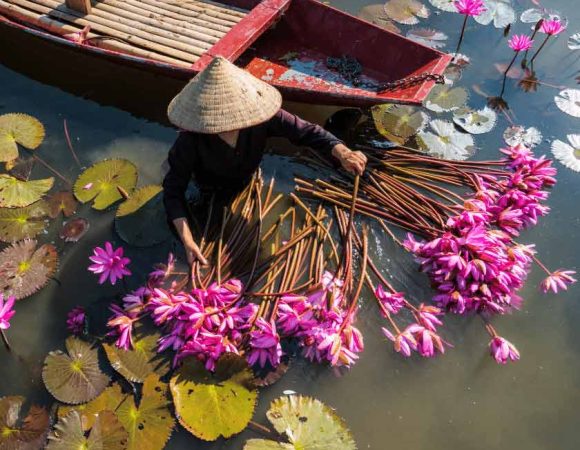 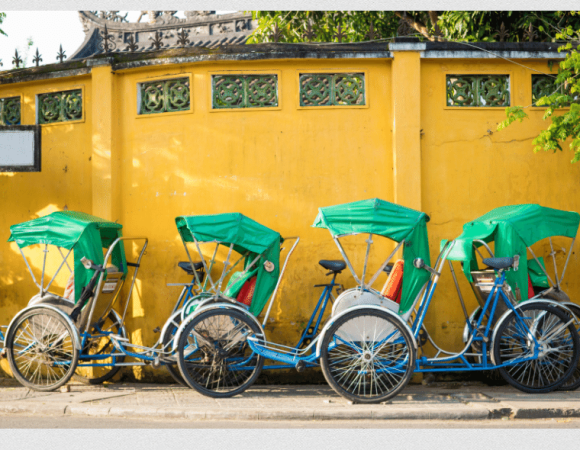 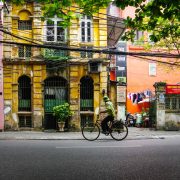 Arrival in Hanoi, reception by the local English-speaking tour guide and transfer to the hotel in the center of the city. (The rooms are available after 2:00 pm).

Meals at leisure. Night at the hotel.

To start the trip, a rickshaw ride in the center of the city allows you to discover the main centers of interests of the Vietnamese capital: the neighborhood of the “36 corporations”, the quarter of the embassies, the surroundings of the lake …

Visit to the temple of Literature, built in the 1070, a symbol of the education in the country, that represents the traditional Vietnamese architecture.

In the afternoon visit a water puppet workshop of a local artist, where you can learn about this tradition of Vietnamese culture and enjoy a show provided by the host. If you wish, you can create your own water puppet and learn to use them with the help of the local artist. After the visit, return to the hotel.

Experience 1 (see price in the experience table at the end of the document): Walking tour in Hanoi old town with degustation of a local delicacy and a Vietnamese cappuccino (with beaten sweetened yolks) or a local beer in a pavement bar. 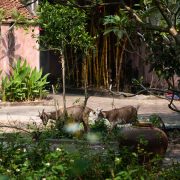 Road to Ninh Binh, also known as the Halong Bay on land, because of its incredible landscapes. Along the route, you will see many villages and various sceneries.

Ride in a flat-bottomed rowing boat, on a small river surrounded by rice fields and karstic mountains, an exceptional natural landscape.

Lunch in a local restaurant: Roasted goat and puffed rice, a local delicacy.

Walk through the plantations or bike ride in the nearby villages, meeting with the locals.

In the afternoon, return by road to Hanoi, transfer to your hotel. 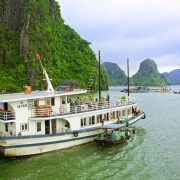 Road to Halong Bay through the Red River Delta.

Arrival in Halong, boarding in a traditional junk, where you will navigate through imposing mountains and about 3000 islands and islets emerging from the emerald waters of the Gulf of Tonkin.

Welcome drink and installation in your cabin.

The junks are a unique way to discover Halong Bay.  The cabins are equipped with AC, a private bathroom with shower, toilet, and hot water.

Lunch on board, and departure for a fantastic cruise in Halong Bay: undoubtedly one of the most beautiful landscapes in Asia.

Discover one of the most beautiful natural caves.

Small introduction to Vietnamese cuisine on board.

Dinner on board with specialties of the bay.

Night on the junk, an unforgettable memory.

To finish the day and if weather permits, a night fishing session of squid will be organized. 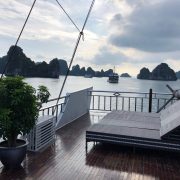 If weather permits, the sunrise is the best moment to photograph the Halong Bay and also for a Tai Chi lesson on the upper deck with nature.

Continuation of the cruise towards a floating village, discover a different way of life, fish farms, floating houses and community buildings. Each year more and more people move to land seeking for a better life but the culture and traditions are still strong among “the people of the sea”.

Early lunch on board as a "brunch".

Disembarkation and travel by road to Hanoi airport to board the flight to Danang.

After the flight, reception in Danang and transfer to the hotel in Hoi An (30 km). 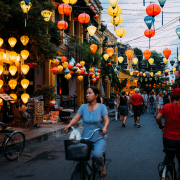 Departure for Tra Que, known as the "organic garden village". Arrival in Tra Que, and enjoy a refreshment made of local products.

Bike ride in the surroundings. Wonderful landscapes surrounded by rice fields. Or a walking tour in the garden to learn about the local aromatic herbs.

Transfer to a local family restaurant where you can optionally participate in the preparation of the food, with the rural style of the country.

Lunch with the dishes you helped to cook.

In the afternoon, discover on foot of the ancient city of Hoi An, walk through the 800 buildings of historical interest and visit the Japanese covered bridge, a historical symbol of the city. Rest of the afternoon free for discovery on your own. 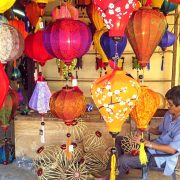 Day at leisure  to enjoy the city on your own. Possibility of going to the beach near the city center.

Meals at leisure. Night at the hotel.

Experience 2 (see price in the experience table at the end of the document): Visit the famous Golden Bridge: Start the day with the road transfer to the Ba Na Hills theme park, where the famous Golden Bridge is located. Upon arrival you must take one of the longest cable cars in the world, with amazing views, to reach the photogenic bridge. Free time on the bridge for photos and to admire the landscape. In addition, you can take advantage of the visit to explore its flower gardens and themed villages with many attractions for children. After the visits,  return to the hotel in Hoi An. * Visit without guide, only transfers.

Experience 3 (see price in table of experiences at the end of the document): Visit by car and English-speaking guide. Early in the morning, route to the Cua Dai fishermen's market, around Hoi An. Every day, the fishermen return from a long night at sea to sell their fresh catch. Stroll through the hectic market and discover exotic fish!

Continue to Tam Thanh village, 40km south of Hoi An on a route following the sea. Beautiful landscapes with snow white sand!

Arrival in this beautiful small town known for its murals and its long wild beach.

Free time in the village to enjoy the beach, the small cafes, restaurants and the pleasant atmosphere. There are no public showers on the beach, so you will have the possibility to take a shower in one of the small homestays near the beach. Return to Hoi An in the late afternoon or whenever you wish. 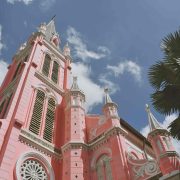 Free time in the morning to enjoy the city on your own.

In the afternoon, transfer to the airport of Danang to board the flight to Ho Chi Minh City, the largest city in Vietnam, known as the old “Saigon”.

Upon the arrival, transfer to the center of the city for the discovery on foot of the old  district, where there are colonial buildings. Photo stop in front of the Reunification Palace. Visit the central post office, designed by Gustave Eiffel’s workshop, followed by Notre Dame Cathedral, with red bricks, constructed in 1880. Walk on the ex-Catinat street to the City hall, the Opera House and the historic “Continental” hotel. 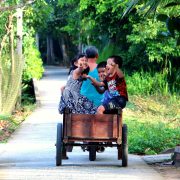 Departure by road to the Mekong Delta. On the way, visit a Cao Dai temple, a religion founded in 1920 by the intellectuals of the South. Discovery of a rich and interesting mixture of culture and traditions, a mixture of western and oriental ideas. Continuation to the region of Ben Tre.

Walk in a typical village, to discover the daily life of the inhabitants. Visit their gardens where you can taste local products.

Lunch in a family house with specialties: "elephant ear fish".

In the afternoon, return to Ho Chi Minh City by road. 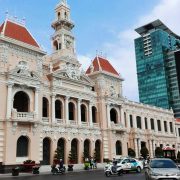 According to the flight schedule, transfer to the airport to take the return flight.

Meals at leisure. Night in the plane.

End of our services.

Arrival in your city. 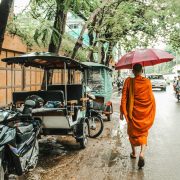 Flight to Siem Reap in Cambodia.

Arrival in Siem Reap, reception by the local English-speaking tour guide and transfer to the hotel in the center of the city. (The rooms are available after 2:00 pm). 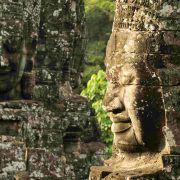 Discovery in tuk-tuk of the Angkor Thom site by the southern gate, after the Naga bridge.

Treasure hunt in the temples! To learn in a fun and educational way, the story of the builders of the Great Kings of Angkor using a digital tablet: have fun, on the way, on the way, entangle enigmas, from temple to temple, to discover these hidden treasures! win the best! To reward you for your effort, a gift will be waiting for you at the end of the search.

Continuation with Bayon, a temple famous for its towers with faces which reproduced the bodhisattva, but also for the fineness of its bas-reliefs. Bayon is one of the most noteworthy monuments of Angkor.

Visit the Terrace of Elephants, also called the royal terrace, where the king and his court attended the ceremonies.

The Terrace of the Leper King, its name comes from a statue which was on the terrace and which was named « leper king » in memory of the king Yasovarman 1 who built Angkor and died of leprosy.

In the afternoon, visit the Ta Prohm temple, a mixture of architecture and tropical nature, where the jungle took over the temple, with large trees growing between the buildings.

To finish the day, visit Angkor Wat, the most famous and impressive temple of the site, its towers are the symbol of Cambodia. Then return to the hotel. 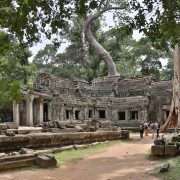 Free time in the morning to enjoy the hotel and walk on your own.

Lunch at a local restaurant.

In the afternoon, departure to Kampong Kleang village. Visit a local market along the way before taking a boat trip to the great Tonlé Sap Lake to visit a floating village. Kampong Khleang is a fantastic place to visit at any time of the year; however, it depends on lake levels that vary from year to year. This floating community is known as the largest since the houses here rise up to 10 meters.

Return to the hotel in Siem Reap. 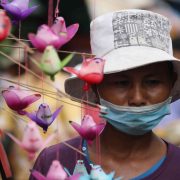 Time at leisure for personal activities.

According to the flight schedule, transfer to the airport to take the return flight.

Meals free. Night in the plane.

End of our services.

Experience 5 (see price in experience table at the end of the document): Cambodian Bamboo Puppet Workshop - a great way to learn, connect and develop your puppet skills. Perfect for families and anyone who wants a fun and unique experience. The process of creating and using traditional leather puppets takes approximately 3 hours. You will learn how leather is cured and prepared, how to draw patterns and carve them by hand, and how to manipulate finished puppets to create a shadow puppet show. The workshops are tailored to the ages and abilities of the participants and are led by professional Cambodian artists. You will leave with a beautiful souvenir puppet and a better understanding of the art of puppetry in Cambodia.

Arrival in your city. 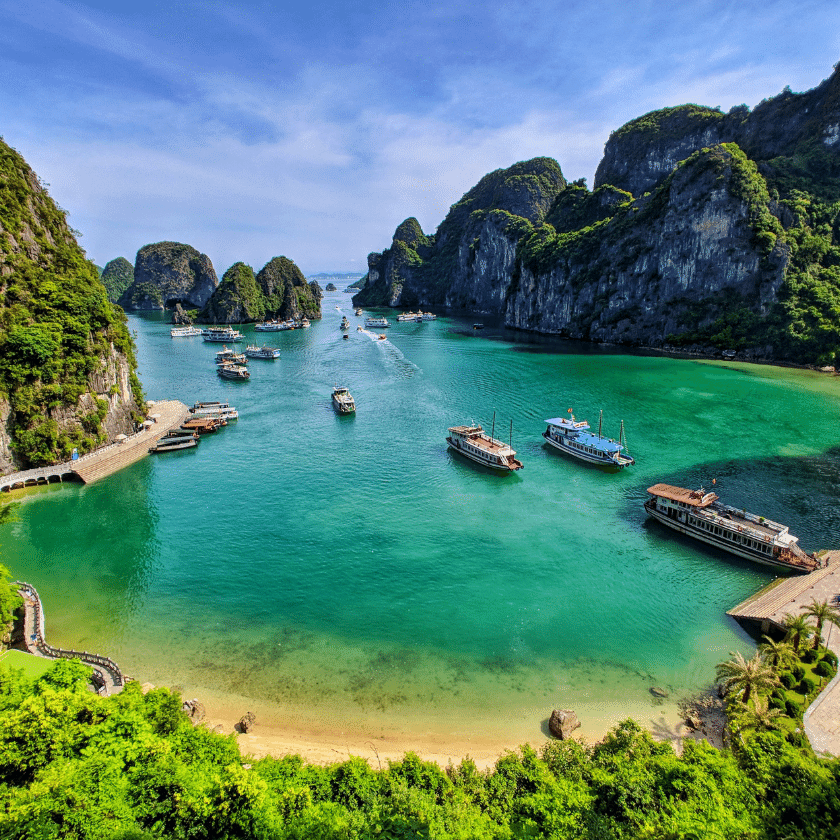 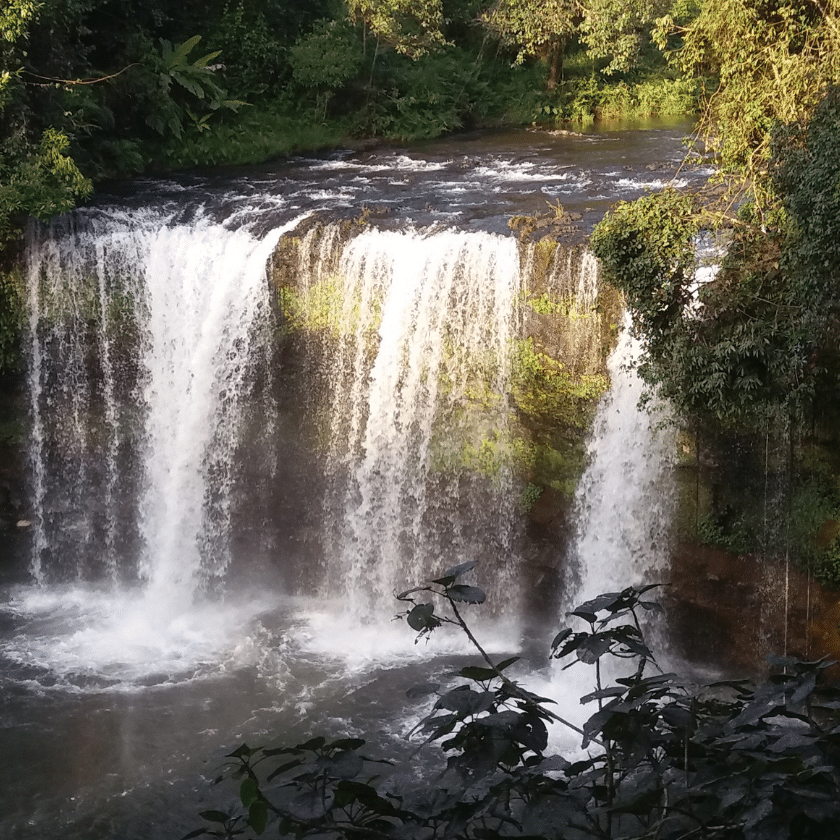 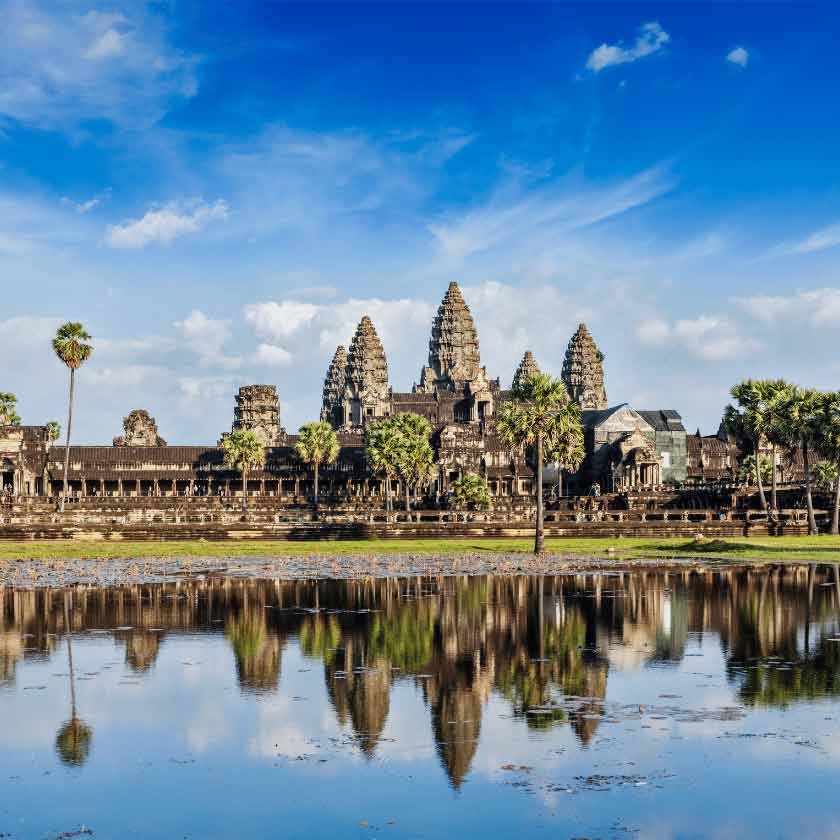